Ansley Herman Fox, one of the most promising young live-pigeon and trap shots in the Baltimore area received patent No. 522,464 for a Breech-Loading Breakdown Gun

Ansley H. Fox, J. Prosser Tabb, Addison C. Fox, Earnest E. Hummer, and Chapin A. Ferguson incorporated The National Arms Company of Baltimore City, with authorized capital stock of $50,000 in 5,000 shares of $10 par value Except for Ferguson, these folks were all from Virginia families that had migrated to Baltimore in the years after the Civil War. Addison was Ansley’s father, and Earnest his cousin. To my knowledge National Arms never produced a gun. The only thing we know for sure National Arms did was look for more capital.

Fox Gun Company registered Trade-Mark No. 32,508, crossed shotguns over a Fox head, all within a circle.

The premier issue of The Sporting Goods Dealer, in an article on Baltimore states “The Fox shot gun, invented and patented by Ansley Fox, one of the most promising young trap shots of this state, is being manufactured here now, but the trouble is that he cannot manufacture the guns fast enough to supply the demand.”

Burr H. Richards buys a 99- by 155-foot lot, a block away from the Fox factory, at South Sharp and Stockholm Streets. On October 25th Burr transfers an undivided half interest in the lot to his son-in-law, Bedford Glascock of Fauquier County, Virginia.

Assets of the Fox Gun Company transferred to a new company, Baltimore Arms Company, incorporated under the laws of the State of West Virginia. Ansley H. Fox becomes a professional shooter for Winchester.

Probably less than a thousand guns were produced in the Fox Gun Company’s one and a half years.  The highest serial number I have recorded for one these guns is 875.  At least two grades are known, A-grade with twist barrels and B-grade with Damascus barrels. The gun displayed is an A-grade with 30-inch twist barrels. 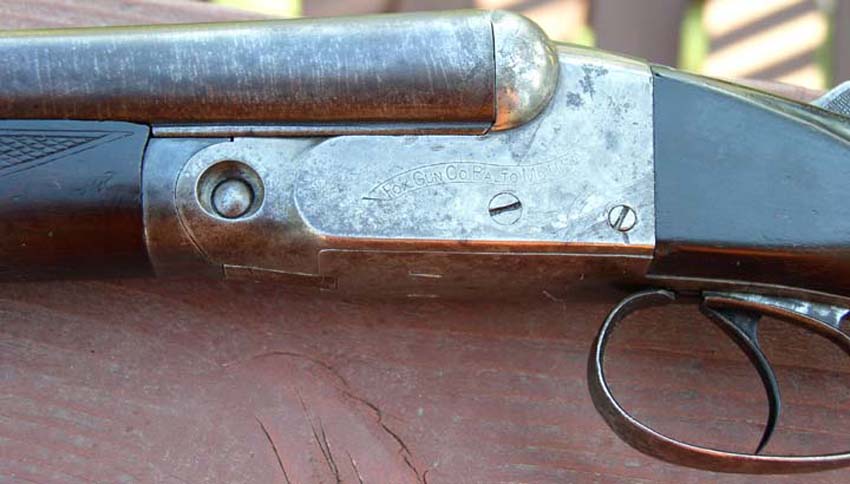